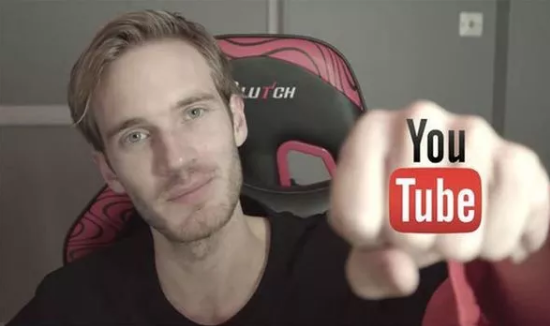 In a montage video released to commemorate 10 billion views to his channel, YouTube star PewDiePie plays computer games, sings “Let It Go” while dressed in full-on Anna-from-Frozen drag, and lifts up his shirt to reveal poop emojis covering his nipples. For the diehard audience of millions who watch the Swedish expat’s show on a regular basis, this is unsurprising behavior to witness. Despite his bombastic weirdo hijinks, PewDiePie has cultivated an attentive collection of fans around the world.

His success comes with confusion and criticism by people who think he earns too much money.

PewDiePie is worth $12 million.

I’d argue that he’s way underpaid for his work.

PewDiePie is one of a growing number of YouTubers monetizing the platform to the point of business-building revenue. The present media environment is such that any audience of substantial size can be expressed in real dollars, so this 26-year-old content creator earns about $4 million in revenue per year on ads shown against his content: in-game footage from various PC and console titles with his frenetic free-flowing commentary running over it. It’s a model that might be easy for old-school media orgs to dismiss; it’s inane and doesn’t seem to require too much talent to execute.

But to blow off the examples of PewDiePie and other YouTubers of his ilk would be a mistake on the level of undervaluing an entire family of stocks in an emerging industry. It’s too important.

To determine what is valuable, we ought to look at what tween girls value in the present. PewDiePie and his well-followed YouTuber associates—Jenna Marbles, the Fine Brothers, Michelle Phan, and so on—boast high-value millennial audiences in the millions. These self-employed creatives make their own high-dollar deals with brands and get contracts with major television networks, all while maintaining their homegrown audiences of consequential size. This feature makes them worth an embarrassing multiple of what they are paid today. To be a YouTube content creator of their level is to achieve nothing less than a new caliber of celebrity, one that is made way more efficient with help from technology. To be a well-subscribed talking head on a video site requires little more than the personal computer one already has at home.

YouTube series are to entertainment media what startups are to the business world, angling hard to be of widespread significance while operating on drastically scaled-down means. A 1080p Logitech webcam costs $60 and worthwhile ideas, though hard to come by, don’t cost a thing. Meanwhile, networks pay an average of $2 million to produce a TV pilot.

The more-affordable paradigm enabled by YouTube isn’t something to be laughed away, but to be embraced. The stars of The Big Bang Theory earn $1 million per episode apiece while PewDiePie earned $4 million over all of last year. This raises the pertinent question: Who’s worth more? The guy who can create, produce, and star in content that reaches hundreds of millions, or just the talent on its own?

The singing-dancing-and-acting triple threats of Hollywood today can’t compete on a business level with the incoming generation of self-producing, self-directing YouTube penta-threats. They are a new class of creators who can find an eager and substantial audience for even niche content. And this content is free, on-demand, and available all around the world.

Everyone knows Justin Bieber puts on a show, but PewDiePie is his own show.

Felix Arvid Ulf Kjellberg—PewDiePie himself—is usually a floating head in the corner of his gameplay videos, but he still opens everything with an intro and closes with a farewell, making eye contact with millions[1]  on a regular basis and doing so with no intermediaries beyond the YouTube terms of service. This yields an audience intimacy enabled by “limbic resonance,” a neurological feature of our brains in which they release chemicals related to love, motivation, sexual gratification, and addiction in order to drive an emotional connection with someone. If you’re looking for effective marketing, follow the dopamine.

PewDiePie is popular in a significantly different and more personal way than standard movie and TV stars are. While Tom Cruise certainly fits the bill as famous, movie stars seem distant and untouchable, so we don’t care about them as much. Meanwhile, YouTubers speak directly to the camera, often in their own bedrooms. The fourth wall is broken beyond repair, and we don’t want them to fix it. This content is intimate, it’s different, and it has a depth to it.

Importantly, the successful YouTuber demonstrates vast monetary value without ever suggesting anything less than total attainability. The basic (yet effective) production value leaves behind a strong suggestion that the high-profile job of “star YouTuber” is a possibility to each and every viewer.

An audience mentality of “I could do that too” goes a long way towards driving subscriber numbers higher and higher. To subscribe is, on some level, to cheer for an independent creator. People most enjoy watching Web content similar to what they would make themselves, were it not for limiting factors like time or worthwhile ideas.

PewDiePie and his fellow YouTube creators hook their fans on a deeper level than any celebrity could hope for, and those fans exert real-world marketplace influence.

When PewDiePie released a video this year about an older and notoriously glitchy game called Skate 3 (his walkthrough of the game featured an overweight skater named Bob who tumbled hilariously when his skateboard tricks failed), consumer interest in the dated and unremarkable title was renewed to the point that people started buying it again. Retailers had to ask Electronic Arts to reprint new copies. Wielding influence of this level has so far seen PewDiePie write a book, start a production company, and release an iPhone app.

PewDiePie’s proven ability to generate consequential real-world income from his free video content is far from an isolated incident. When John Green’s young adult novel The Fault In Our Stars was adapted for the big screen, he was able to mobilize his YouTube channel’s 2.6 million subscribers to go see it in theaters. They did so in droves, even beating the new Tom Cruise movie at the box office.

Rock band We The Kings pushed none other than Beyoncé out of her number one Billboard spot based on the strength of their YouTube following alone. Connor Franta, whose Internet culture and lifestyle videos have earned him 5 million subscribers, wrote a book that spent 16 weeks on the New York Times bestseller list. Independent content creators no longer need a major network’s vote of confidence in order to make substantial economic impacts.

This isn’t a flash in the pan.

The Internet has simultaneously made distribution free and caused content consumers to redraw the lines for what they find sufficiently entertaining to watch on a regular basis. The anyone-can-be-a-YouTuber mindset turns triple-A entertainment on its ear and allows for a more personal reassessment of what one finds truly engaging. The on-camera talent for these niche series can also be the writer, director, producer, editor, and network. The cost of a webcam be broken out over multiple episodes, and it eventually costs a few bucks per episode to create an entire series rather than a couple million to make one episode of something that might not have any staying power.

By comparison to the television industry’s bloated budgets, YouTube series are lean and mean, commonly a one-person effort from top to bottom.

They operate within a paradigm that allows for a new sort of credibility, one that holds deep and recurring significance online with effectively fixed production costs. As such, it’s a credibility that scales; every time someone clicks a YouTuber’s subscribe button, he or she reveals something of his or her tastes and general sensibilities. Moreover, this is content that a growing number of millennials prefer to other formats.

A study by Hunter Qualitative Research yielded results that millennials enjoy YouTube entertainment more than television. They find it more relatable and it makes them feel better about their lives.

The era of YouTube celebrity might be one where a foul-mouthed videogamer is captain of the ship, but YouTube as a juggernaut of attention has real staying power. You only need to look so far as Smosh, the two-person comedy team that grew its YouTube presence to 21.5 million subscribers over 10 years of regular activity on the site. It made headlines when PewDiePie passed them in viewership in 2014 (he’s now the single-largest entity on the YouTube platform). Ridicule him if you must, but don’t be surprised when Felix Kjellberg is earning ten times his current income in the near future.

Until mainstream media organizations learn to tap into this new and lucrative zeitgeist, PewDiePie can be found on his YouTube page, electrocuting his girlfriend.

Posted in:
influencer, Multi-Channel Network, YouTube Creator
Tagged as:
advertisingpewdiepieyoutubers
If you liked this article please consider sharing it.
Articles You May Like