Front Seat At The White House 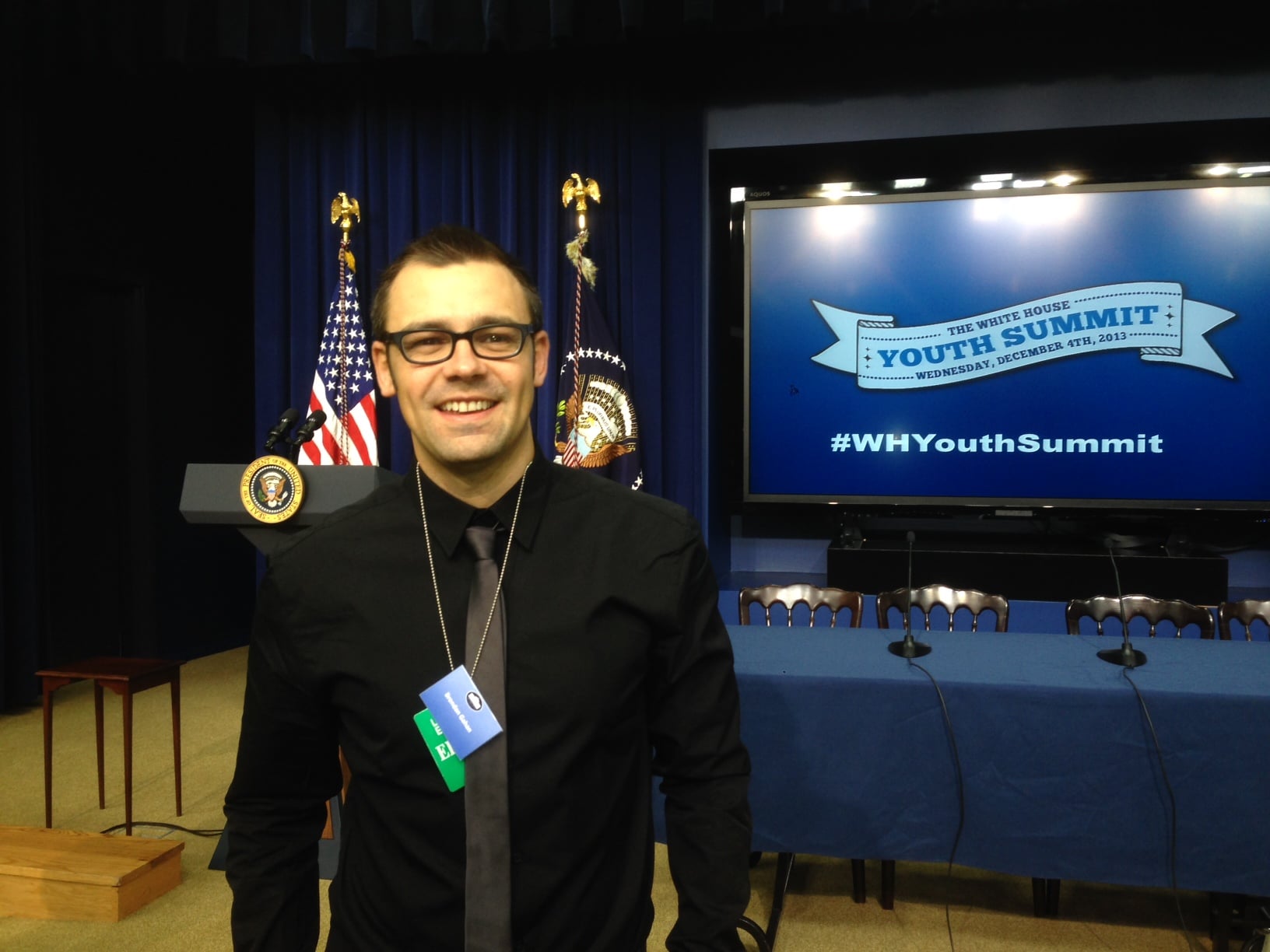 Back in December, I was fortunate enough to be invited to The White House Youth Summit, which was “made of up 160 of this country’s finest national and local leaders aged 18-35.” It was a pretty incredible experience. Obama came and spoke to the group (check out the video below), and I got to speak with the Obama administration’s staff, including the digital team. The event made news nationwide and was picked up by CNN, USA Today, LATimes, and dozens of other outlets.

The event was December 4th of last year, and the day started in the early afternoon. After going through multiple security checkpoints, I eventually arrived at the South Court Auditorium, which looks a lot like the traditional press/briefing rooms you see in movies. The room has a small stage with big blue drapes and a podium with the presidential seal; it felt like something right out of the West Wing.

After signing in everyone spent some time taking photos before a swarm of press came in and quickly lined up across the back. Within five minutes there must have been 20 major TV networks and cameras set up. After a short introduction Obama waltzed in, and the small room erupted with hoots and applause; he called us a rowdy group, which I think we all felt a sense of pride in. It was exciting seeing the president in person, and also disarming how relaxed he seemed, at times leaning on the podium and seemingly speaking off the cuff and cracking jokes.

After Obama left, there was a panel comprised of representatives from Rock the Vote, Jeremy Nordquist (the State Senator of Nebraska) and a handful of others. The panel and short Q & A afterword served as an overview of the Affordable Care Act (ACA). From there we broke out into groups based on our various backgrounds and interests.

I ended up in the The Indian Treaty Room with most everyone working within technology and media. There we had a brainstorm around what the administration should be doing to better connect with young people and drive signups on healthcare.gov. It was pretty cool sitting there and being asked by the White House what they should be doing in digital. Definitely a humbling/exciting experience. A lot of stuff was discussed, but the overarching consensus was that its probably best to get the word out by tapping into existing online communities and personalities vs trying to create an original viral or social media campaign — there just wasn’t a lot of time. I was excited to be a part of and contribute even in a small way. Adding the excitement and gravity of what we were working on was the fact that the Indian Treaty Room, the one we were all in, was where the peace treaties with Italy, Hungary, and Romania after World War II, and the United Nations Charter were all signed.

The overarching sentiment and desire to  speak to youth in a way that was credible and compelling was something that I felt throughout my time at the White House. It was clear the administration was passionate about the Affordable Care Act and the positive effect they felt it would have on the lives of our nation’s youth. I learned more about the ACA than I’d ever known before, and I walked away pretty inspired by the fact that the White House brought so many young people together to actually ask our opinions.

The administration’s decision to collaborate with top YouTube creators Tyler Oakley, Hannah Hart, Nice Peter, Alphacat, and a handful of others was another great example of reaching millennials to get the word out about the ACA and drive signups to healthcare.gov. The initiative was incredibly effective, and I think brands could learn something from the way the Obama administration embraced social media and YouTube in particular. A brief look at the numbers show that the earned media generated by collaborating with content creators far outperformed the White House’s own content. 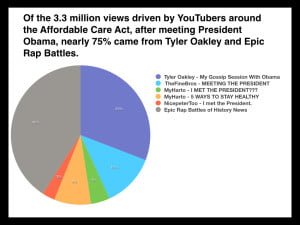 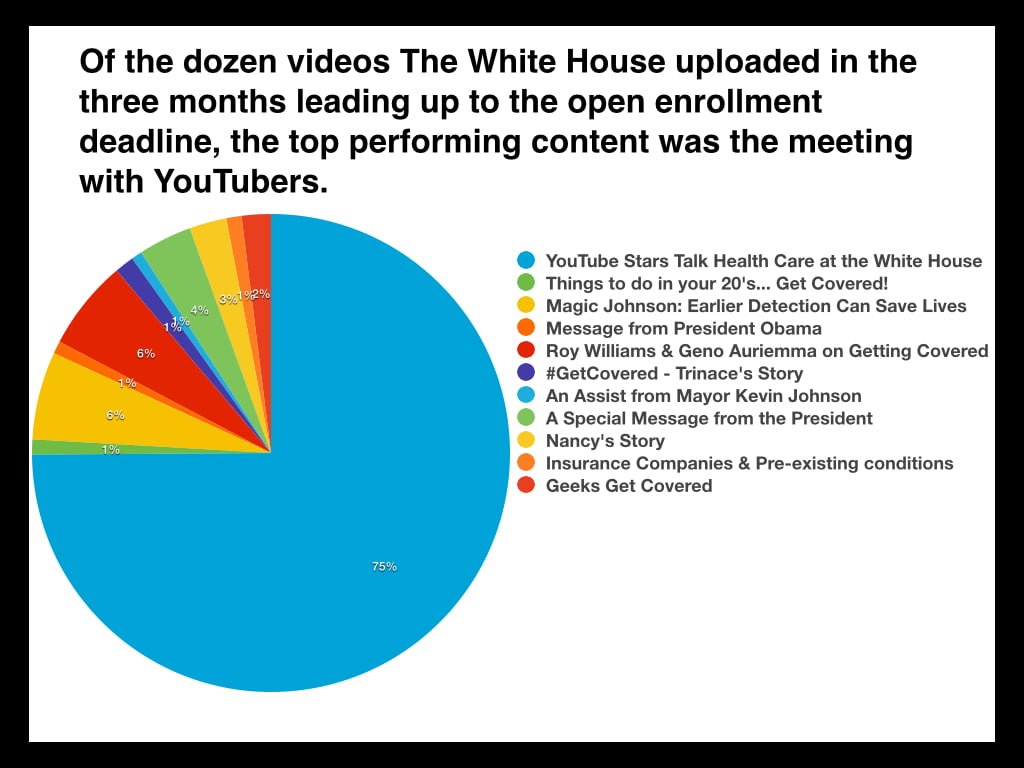 The numbers that Tyler, Hannah, Peter and crew drove were impressive, and having Obama appear on Zach Galifianakis’ ‘Between Two Ferns’ was a major win as well. I have to give the administration major props for trusting Zach and the Funny or Die team to do what they do best and not sanitize the whole experience. As Zefr noted in their own blog post on the topic, “this brand integration worked because it remained true to the style that made “Between Two Ferns” what it is. By giving the fans what they come to expect from Zach Galifianakis, a video that might have otherwise come off as nothing more than a ‘plug’ by another ‘lame politician’ instead created a level of authenticity that the YouTube generation craves.”

The numbers certainly reflected the fact that Funny or Die gave the fans what they wanted — racking up nearly 24 million views. 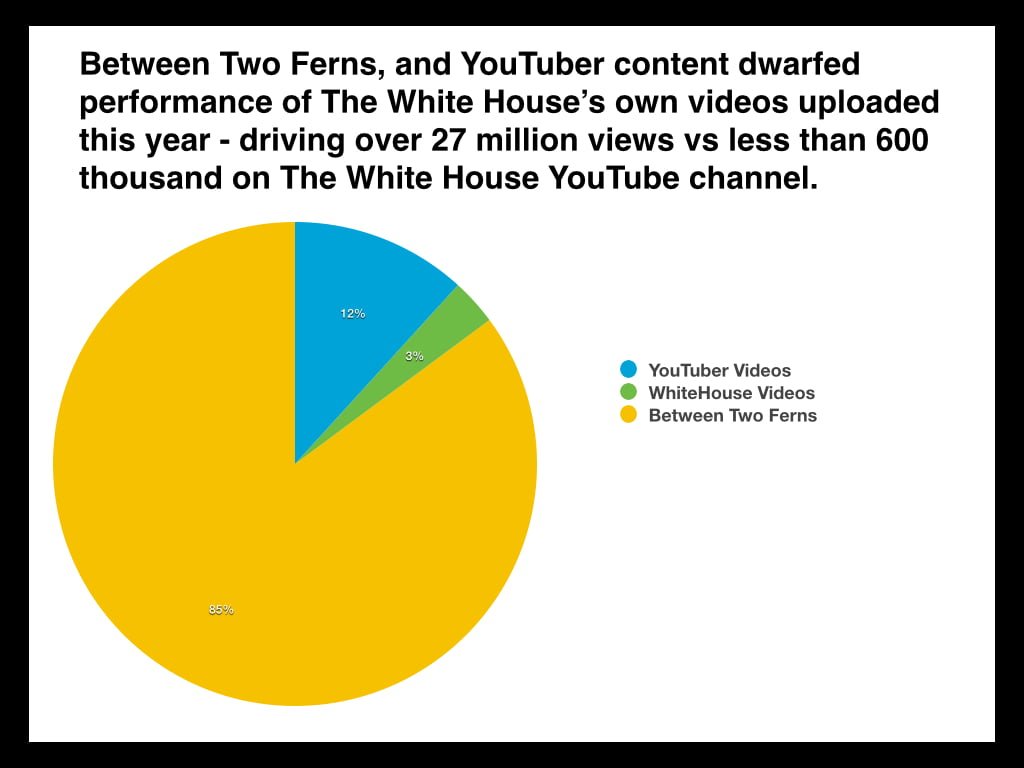 After the passage of the Indian Appropriation Bill, President Benjamin Harrison declared that on April 22, 1889, at 12 o’clock noon the Unassigned Land of the Oklahoma territory would be open for settlement.
Read More...

Brands tend to fall flat on their face with ads on any new medium.
Read More...

The Future Of Social Advertising: The Definitive Guide (Part III)

This is part 3 of a 3 part series on the future of social advertising.
Read More...
Like What You're Reading?
Sign up for my newsletter. It's free and I'll never spam you.