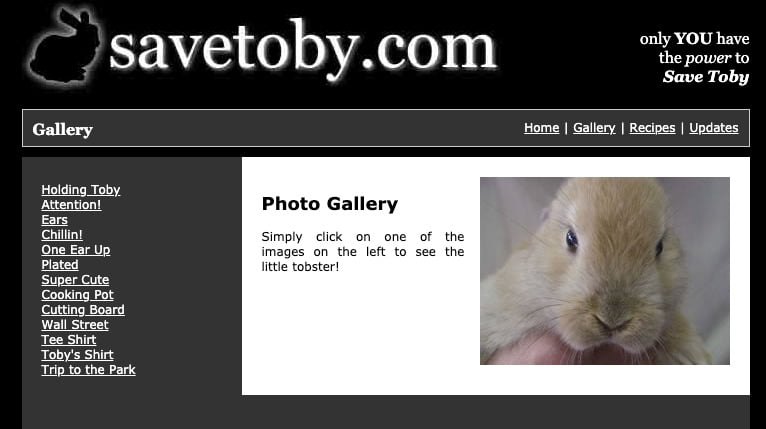 15 years ago there was a lovable, oatmeal-colored, rabbit named Toby.

His story begins when he was, “found by James and Brian under their porch, soaking wet, injured from what appeared to be an attack from an alley cat. They took Toby in, thinking he had no chance to live from his injuries, but miraculously, Toby recovered.”

Sounds like a typical feel good story on the Internet, right?

James and Brian, decided to “put Toby at risk for their personal gain.” If $50,000 in donations wasn’t received by June 30th, 2005 Toby would be killed. All this was laid out on their website SaveToby.com.

This wasn’t a fundraiser to nurse the bunny back to health. Toby had already recovered from his injuries.

This was a ransom.

If people didn’t donate $50K Toby would be killed. He’d be finito. Whacked. Under the sod.

Photos on SaveToby.com punctuated the rabbit’s grim situation. They showed Toby in a frying pan, on a plate, and even lounging on a cutting board. As if that wasn’t macabre enough there were recipes for how to cook rabbit.

Animal rights activists inundated GoDaddy, the site’s hosting platform, with complaints. Paypal, which was being used for donations, was deluged with calls to cancel the site’s account.

People felt compelled to drive awareness of this injustice on the Internet.

What do you think happened next?

Activists must have succeeded in the site and PayPal getting shut down, right? Certainly the public pressure became too much, right? Wrong.

Save Toby became a phenomenon on the Internet.

The outrage only led to more awareness on the Internet.

James and Brian got a book deal with Kensington Publishing (you can still buy it on Amazon today). They got their ransom, and then ratcheted up their demands again. Soon Toby was going to die if they didn’t hit 100k in book sales.

The fight to shut down SaveToby.com backfired.

Well intended outrage only abetted Toby’s would be executioners by driving more awareness of their cause. That awareness led to more donations.

Why did they think their public outcries would work?

Jonah Berger, author of Contagious, studies online virality. He demonstrated that, “content that evokes high-arousal emotions (i.e., awe, anger, and anxiety), regardless of their valence, is more viral.”

Online our behaviors are predictable.

The more angry something makes you, the more likely you are to engage with it.

We intuitively understand this.

What we’re less aware of is the impact our reactions have.  It makes us feel better to give a self-righteous response.

We perceive responding as furthering our cause. Unfortunately for us, that response generally aid’s the other person’s cause.

Why does this matter?

People know this and weaponize it against us.

On a daily basis we’re bombarded with messages from brands, trolls, news outlets, politicians, and pundits.

In the case of SaveToby.com, the kidnappers elicited outrage and the resulting outcry only furthered their agenda.

Did animal rights activists set out to aid the owners in making fifty grand and getting a book deal? Of course not. Why would they want that? But, that’s exactly what they did.

It feels counterintuitive to bite your tongue. Before returning fire to some troll with a brutal comeback ask yourself this question.

What can I expect to happen by reacting vs holding back?

Who is benefiting from my response?