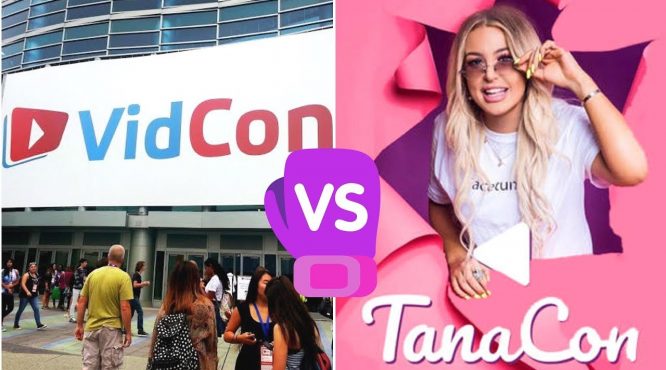 Tanacon is an example of influencer marketing gone awry, and exactly the type of outcome that so many brands have experienced and why so many marketers have a bad impression of the tactic.

Best known for her vlogs and pop-music, Tana Mongeau is a 20-year-old YouTuber with over 5 million subscribers across her two channels. Tana recently attempted to create her own, alternative to VidCon, which she dubbed ‘Tanacon’.

The whole ordeal started when, according to a video Tana created, VidCon had promised her a VIP pass then withdrew the invite after she’d promoted the conference to her fans. After her anti-VidCon rant generated millions of views Tana decided to launch Tanacon and make an anti-VidCon. The original vision for Tanacon was that it would be free and all fans would be given the chance to meet their favorite creators (VidCon charges for tickets).

Tanacon quickly drew a roster of over 65 well known creators including uber famous YouTubers Casey Neistat and Shane Dawson to make appearances. In the weeks leading up to Tanacon the event built up a huge amount of publicity. Tana promised that fans would get 4X the value of the price of their paid tickets (and promised to let many fans get in free).

Tanacon ended up being a disaster of epic proportions.

Within hours of opening its doors Police shut down Tanacon. Apparently 5,000 fans showed up – almost all of them spent hours in the hot sun waiting to get inside. One fan collapsed and was taken away by paramedics, hundreds of others got sunburns.

The event was massively understaffed, had minimal security, and almost none of the attendees got into the venue to see any of their favorite creators. The swag bags that were promised to be 4x the value of a ticket turned out to be filled with a few stickers and some condoms.

It was exposed later, via a three-part documentary by YouTuber Shane Dawson, that Tanacon was put in the hands of a 21-year-old talent manager with questionable credentials. The documentary exposed countless missteps, but the most egregious was that Tana had agreed to host over 5,000 fans, in spite of the hotel only having capacity for 1,000.

Why does any of this matter, and, why am I writing about this?

I think this shit show is the result of the same kind of behavior we see in (a lot of) influencer marketing. People quickly build audiences and become ‘influencers’ – they oftentimes have millions of adoring fans that hang on their every word and will do just about anything the influencers asks.

The issue then becomes that they don’t have any ‘real’ business experience. While they know how to build their audience and cultivate their community they don’t necessarily have the same skillsets that translate to understanding timetables, budgets, project management, etc. As a result they get in over their head and don’t take their newfound responsibilities of running a business seriously when it comes to working with major brands and companies.

In the case of Tanacon – they signed a contract with the Marriott to host the event, which stated they could host just over 1,000 people. Tana and team decided to say ‘fuck it’ and sell tickets for 5,000 people. This is not the behavior of normal businesspeople, and its wayyyyy out of bounds of common sense.

Unfortunately it is too common.

I’ve worked with thousands of influencers. Some of whom are phenomenal and professional – they’re buttoned up, they know what they know and delegate the rest to their team.

There’s another contingent of influencers that believe because they have their audience the only thing that matters is that they’re ‘authentic’ – that this ‘authenticity’ comes at the price of any real responsibility and is a hall pass to be a terrible business partner. Deadlines are missed, the work promised comes back as something totally different, and communication is lacking. I’ve had influencers ghost on deadlines, come back late and say that they don’t want to post their original idea after they already shot it, have asked to get out of contracts right before deadlines were supposed to be met (and even right after) without real reasons.

This behavior is more common in influencer marketing than in any other business or aspect of marketing and advertising I have ever seen. It is too common. Just after VidCon I was hanging out with a buddy that is a talent manager. While hanging out one of his talent called to say that a video he’s been working on for a brand for the last week and was already a few days late to post wasn’t going to work for his channel and he no longer wanted to post it. This was a video the influencer concepted and sold to the brand. This was a video he’d edited entirely himself knowing the deadline and where it was going to live. He had 100% creative control, but still didn’t want to post it because he didn’t think his audience would like it.

This is not acceptable behavior for a professional. If it was any other part of the ad industry you’d work late – make it happen (or just think things through far enough in advance to avoid issues).

I don’t mean to disparage all influencers or paint the brush that they are all a pain in the ass. They’re not.

However, I do think that there’s a lot out there that are burning bridges for the rest of the industry.

Marketers and agencies are working with billion dollar brands. There are campaign deadlines and bosses these people are accountable to, there are stockholders, and real consequences.

Many influencers are much more like the Hank and John Green who developed VidCon. That event is buttoned up. It’s been slowly growing over the last nine years and is hands down one of the best-run industry conferences I go to (full disclosure I’m on the VidCon Advisory Board, but I’d believe this even if I wasn’t).

Hank and John Green have taken the event seriously from the beginning – they’ve planned methodically with venues booked over a year in advance. This past year VidCon hosted over 30,000 people, hundreds of creators, and worked with dozens of sponsors over the four days of the event. Sessions and keynotes started on time. Security was tight, and the event was incredibly professional and brand friendly. This is no small feat.

I love unbridled ambition and the passion of young entrepreneurs. However, within the influencer-marketing ecosystem there are a lot of bad actors who need to understand that if they want to work with brands they need to take the contracts they sign seriously.

Many influencers are creating terrible experiences for the fans and the brands.

In short – don’t be like Tana and ignore the contracts you’ve signed and not take things seriously. Instead be like Hank and John Green – build your reputation as a trusted source, think through who you work with, the agreements you sign, and the work you decide to take on.

The future is not at Cannes and I’m shocked at how many brands and agencies are spending so much money to go to the South of France, when VidCon, the largest digital video conference overlaps with the conference.
Read More...
Like What You're Reading?
Sign up for my newsletter. It's free and I'll never spam you.