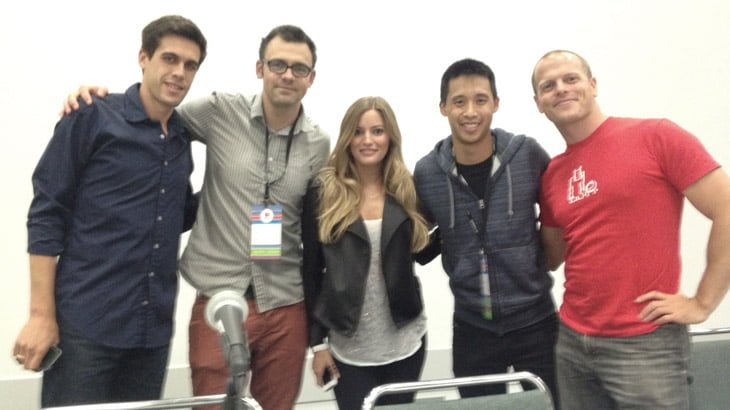 I had a blast at this year’s Vidcon. It’s amazing to see how massive the event has gotten. Each year its eye-opening to see the excitement and growth around the space. Although a lot has changed – a lot has stayed the same. A number of the top guys are still on top (Phil, Toby, Smosh, etc), there are still tweens running everywhere screaming in a Bieberesque frenzy, etc.

I was particularly excited this year because I got to be on stage with some of the people I admire most in the space. The panel topic was ‘Social Media For Disruptive Marketing,’ was moderated by Benny Lou and featured iJustine, Tim Ferris, Ryan Holliday, and myself. I can’t remember everything that was discussed, but actually found a blogger that transcribed a good portion of the panel. I’ve pulled a few of my favorite quotes from their post below.

In response to the best way to help gain traction online, Tim made some great points about the need to build real world connections –

The best way to make it in tech is in-person meetings because it’s the least common communication. At SXSW he repeatedly asked questions hey who should I meet this is the kind of stuff I’m into, don’t collect business cards, no one will remember you that way. Would wait until they asked him who he was, all would say is I’m writing a book, then wait for them to ask for more. Then soft sale, could I send you a short little segment to see what you think? Making truly deep relationships with a few key people is much better than getting out 50 business cards and meeting a lot of people. Don’t get loved for something you’re not, thin the herd, “planet-earth style,” you do not have to fake, if you have a small and extremely loyal audience they can sustain you forever, you don’t need a big following, so it’s more about finding out who you are than finding more audience.”

Controversy is something that provokes a reaction Contagious (Jonah Bridger, studied 7k articles most emailed list) Length of stay time depends on how angry the reader is. Provocation is what gets people sharing something. Think about all the ads that you see that you don’t remember. It doesn’t matter, it’s all about getting a reaction so they’ll talk about. Target who will like it, also target who will hate it- sometimes your opponents can be your larger sharers ever. You get a young man to go watch something by having a young woman telling him not to watch it.

It looks like there is at least one video (via vlogger SeanThinks ) with a quick clip or two of the panel:

Some nice photos from the panel –

Posted in:
Conference
Tagged as:
If you liked this article please consider sharing it.
Articles You May Like