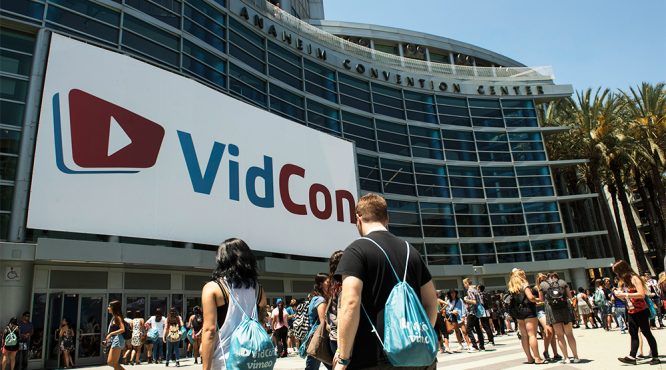 VidCon 2018 is a great fucking conference.

It’s got diversity, great/big announcements, excitement and knowledgeable panels and speakers. This year definitely felt like the tipping point for the conference – getting so massive and (what felt very) mainstream. Having been to every single VidCon so far (including the international ones) here’s my quick recap/takeaways:

VidCon is fucking HUGE this year. I think there were over 30K attendees and it even sparked its own spinoff, TanaCon. Tanacon drew its own roster of 80+ big name influencers (Casey Neistat, etc) and apparently an additional 20k attendees, which ultimately resulted in it getting shut down.

We’ve been talking about influencers as celebs for a long time, but this year there was a noticeable shift.  Influencers pretty much did not mingle anywhere – security was through the roof, everything required an RFID wristband to get in and out, way more restricted access, etc.

In years past the influencers were relatively accessible, fans were screaming all over, etc. That was definitely not the case and it makes sense given the size of the crowds and potential dangers associated with that many people coming together in one place.

Ray Kurzweil (AKA the guy who popularized singularity) spoke and Marshmello DJ’d.

Almost all the endemic brands and companies (other than the major platforms like YouTube, FB, and Insta) have been sidelined by major brands. In years past the MCN’s really dominated things here. Now its all Mars, Amazon, Adobe, etc.

YouTube is still the big player, but the biggest announcement that got people excited was IGTV. If you watch their announcement video you’ll notice they’re basically going after the youtuber/influencer crowd – the tone is much younger than Facebook and it is open to anyone.

Compare IGTV with what YouTube has done with FB watch and it makes sense. FB has kept FB watch heavily curated and limited to fewer partners – probably to appeal to an older demo and keep things more premium for advertisers.

I think the combo of IGTV and Facebook Watch ads up to a formidable competitor for YouTube (for ad dollars anyway).

PEOPLE STILL DON’T ‘GET IT’

At VidCon 2018, The big draw for me was seeing the announcements from Facebook & Instagram, but the two biggest recurring themes within the programming was the same as in years  past, i.e. how brands and influencers work together and how to create content that will be shareable for _____ platform.

Personally, I’m frustrated as an advertiser that there’s still such a need for these talks. Influencer marketing and social video are not new – YouTube has been around for over 12 years now. Brands and agencies need to get an understanding of the basics.

YouTube is the backbone of the digital video and influencer ecosystem. Everyone gripes about them, and they’re slow moving, and easy to poke fun of (not innovating enough, not paying partners enough), but no one is seriously talking about abandoning them. They’re still considered ‘too big to fail’.

They didn’t have any big sexy announcements at their keynote in VidCon 2018 and this year the CEO didn’t even come down to do the talk, but there’s no serious indication that they are defunct – they definitely have Facebook nipping at their heels, but they’re still the king.

Posted in:
Conference, Facebook Watch, IGTV, Vidcon
Tagged as:
facebookinfluencer marketingvidconyoutube
If you liked this article please consider sharing it.
Articles You May Like