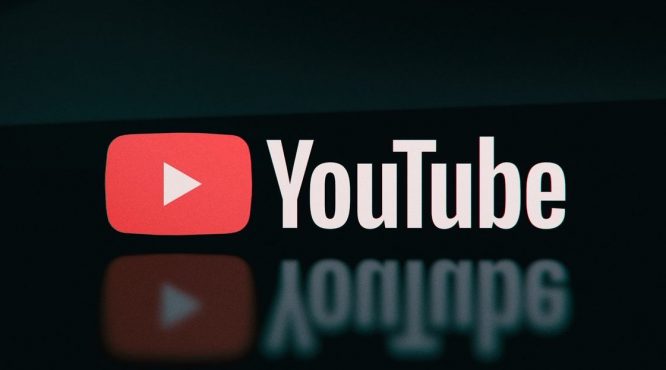 Successful brands understand that they need to create consistent content. Hitting singles and doubles is far superior to a “grand slam” that a viral video may or may not provide.

It’s the adoption of this “always on” strategy that is successfully growing communities and generating earned viewership on YouTube.

Over the last year, YouTube has been sharing this strategy with brands. Known as the Hero, Hub, Hygiene model, it is a holistic video strategy that places an emphasis on the need for consistency.

[Click to read my updated post on this strategy under it’s new name of ‘Hero, Hub, Help’]

HUB CONTENT: This should be the bulk of a brand’s programming and be episodic in nature. Lastly, the foundation of the content pyramid is the hygiene content.

HYGIENE CONTENT: This capitalizes on existing user interests and is designed to pull users in based on search. This typically takes the form of ‘how to’ content, addressing FAQ’s, and tutorial content. 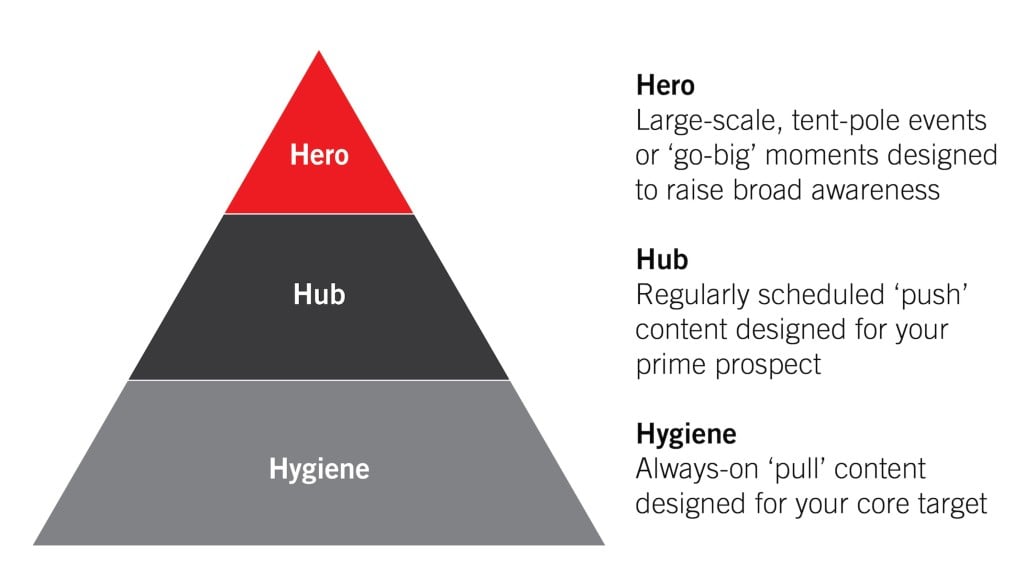 WHY USE THE HERO, HUB, HYGIENE MODEL?

The Hero, Hub, Hygiene model gives brands the latitude to create campaign and viral content, but emphasizes the creation of content series.

Successful YouTubers have been implementing this strategy since the platform’s early days. They’ve communicated to their audiences a regular posting schedule so that new content isn’t a surprise that may or may not be discovered, but something that the audience can reliably look forward and return to.

Hero videos are meant to support large events that drive mass awareness – typically product or event launches. According to YouTube, Hero content should be done on average 1-2 times a year.

Red Bull’s Project Stratos drew worldwide attention for sending Felix Baumgartner to the edge of space. Baumgartner leapt from his hot air balloon and set the world record for the highest freefall jump.

Red Bull has multiple hub video examples. For example, there are the behind the scenes and training videos leading up to the official Project Stratos jump.

Another example of hub content is the “Who is JOB” series. “Who is JOB” is a reality web series on its fourth season, that documents the life of pro surfer, Jamie O’Brien and his adventures with friends.

Hygiene content is meant to capture viewers searching key terms related to the brand. Even if your brand isn’t creating the extreme sports content that Red Bull does, it can still create highly relevant hygiene content.

For example, if you’re a computer software company, your content could be how-to videos helping your consumers navigate your product. People tend to find hygiene videos through search when they’re looking for answers to a specific question.

Red Bull has a ton of hygiene content examples. The brand has ‘how to videos’ ranging from “How to film a skate movie” to “How to master the art of cliff diving.”

HOW EFFECTIVE IS THE HERO, HUB, HYGIENE MODEL?

Let’s take a look at one of the most famous viral brands and how it is doing on YouTube vs it’s competition.

Within the shaving industry, Dollar Shave Club is considered to be the king of online video. They exploded on to the scene in March of 2012 with a disruptive pricing model and hilarious video, which immediately went viral.

By all accounts, the video is a success and has been key to Dollar Shave Club’s momentum. However, for every Dollar Shave Club, there are thousands of attempted viral videos that are total duds.

In many ways the Hub, Hero, Hygiene model allows brands to relieve themselves of the pressure of having to create the next big viral hit. Instead they can focus on a long-term community-building strategy. This is something that Gillette has excelled at.

Gillette has taken the opposite approach of Dollar Shave Club, and as a result has generated more subscribers – cultivating an engaged community that it can continue to tap into. 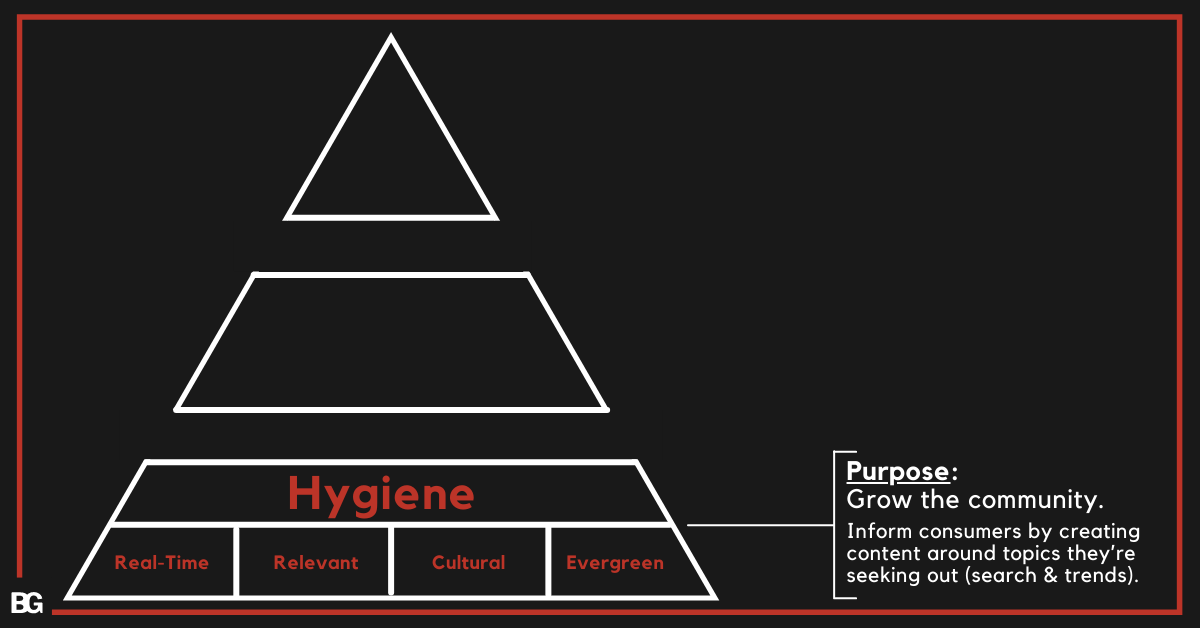 There are 51 how-to videos on the Gillette channel, ranging from the obvious (“How to Shave”) to the more obscure, such as “How To Shave A Pencil Thin Mustache.”

All of these how-to videos are providing value to their target demographic.

What is your audience actively searching for regarding your brand or industry? What can serve as your 365-day-relevant, always-on, PULL content programming? E.g. product tutorials, how-to content, customer service, etc.

In Gillette’s case, each of these how-to videos has been created around key search terms relevant to their target demographic (ie adult men who are shaving).

This is classic Hygiene content – for example, Gillette’s “How to Shave – Shaving Tips for Men” video has over 1.5 million views, one thousand likes, and nearly 500 comments. It’s a simple instructional video with voice over and basic motion graphics to transition from each step.

Undoubtedly, Gillette’s content marketing team looked at YouTube and Google’s keyword tools and identified that there are an average of 44,000 searches on YouTube, and nearly a million on Google each month. Gillette’s “How To Shave” videos now appear on the first page of search for Google and YouTube search results, and are supported with advertising. 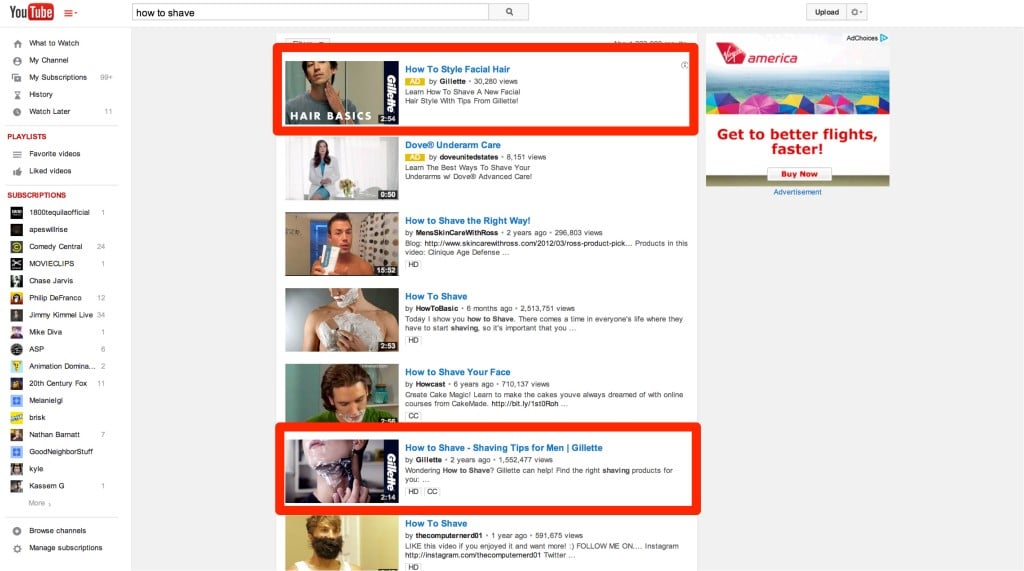 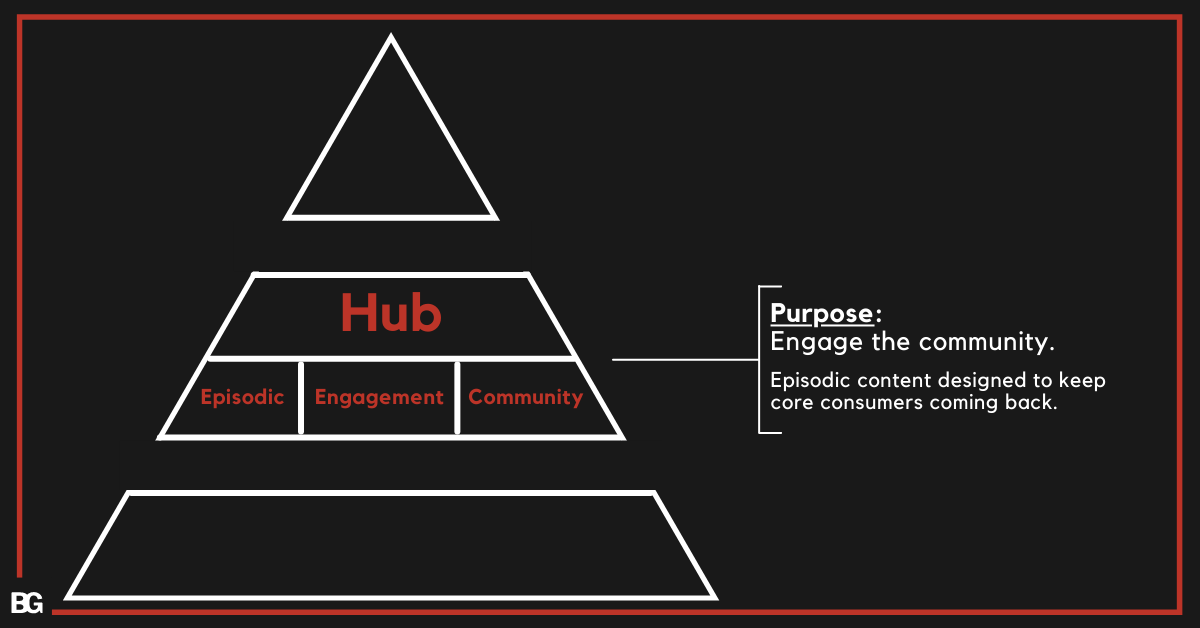 They create content series that are entertaining and tap into their target consumers’ passion points. For example, a great hub content example is –  “What Women Want.”

The series features Q&A sessions with supermodels Kate Upton, Hannah Simone, and Genesis Rodriguez. The supermodels discuss their POV on male grooming habits, and give advice to male viewers. The content was created specifically to promote the Gillette Fusion ProGlide Styler, a “three-in-one shaving tool that trims, shaves and edges for whatever body hair style she likes.”

Like any brand, Gillette has its mainstream Hero content intended for the masses. Being a sponsor of multiple high-profile athletes such as Ryan Suter, Clay Matthews, and Ryan Sheckler has enabled the brand to leverage them in key tent-pole moments. 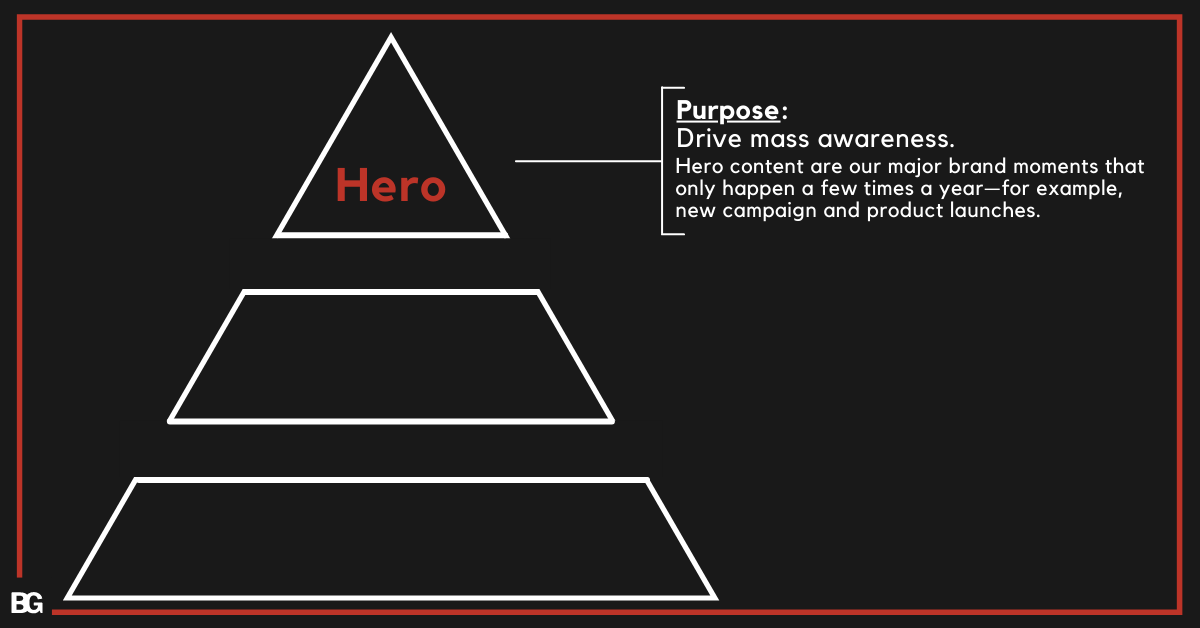 The video was part of a larger brand campaign and invited men and women to visit a site, where the documentary was housed. There, women were polled on what they preferred most – clean shaven or men with facial hair (perhaps unsurprisingly, the results of the poll stated that most women prefer clean shaven).

As a Gillette spokeswoman positioned it, the campaign “was strictly to drive awareness to the conversation.” These mass awareness campaigns are the archetype of Hero video content. It’s the content meant to be seen by the masses. As YouTube positions it in the brand playbook:

What content do you want to PUSH to a big, broad audience? What would be your Super Bowl moment? A brand may have only a few hero moments in a year, such as product launch events or industry tent-poles.

WHY IS THE HERO, HUB, HYGIENE CONTENT STRATEGY IMPORTANT?

As a result, it’s imperative that content provides value to consumers in order to gain traction.

Many brands are creating content that is transparently self-serving, which is off-putting for consumers. Hundreds of thousands of dollars don’t solve the issue either.

Driving views to your video may boost your view count, but if engagement drops off after the first 5 seconds, is that content valuable? I’d argue you’ve effectively created content that acts as a “leaky bucket” which is inefficient in its inability to convert consumers to subscribers (or even get them to watch a full video) and in its inability to make a lasting impression with consumers – which may alienate them entirely.

Going forward, brands can’t rely on capturing lightning in a bottle with a viral video.

Instead, a brand channel needs to have a solid foundation of Hero, Hub, and Hygiene content to draw viewers in and turn an audience into a community.

Posted in:
Hero, Hub, Hygiene, YouTube, YouTube Marketing
Tagged as:
advertisingbrandsherohero hub hygienehubyoutube
If you liked this article please consider sharing it.
Articles You May Like

Want to build a YouTube channel? The Hero-Hub-Help content strategy is the ideal way to grow a brand channel.
Read More...

I recently did a presentation at ReelSummit on how brands grow their channels.
Read More...
Like What You're Reading?
Sign up for my newsletter. It's free and I'll never spam you.