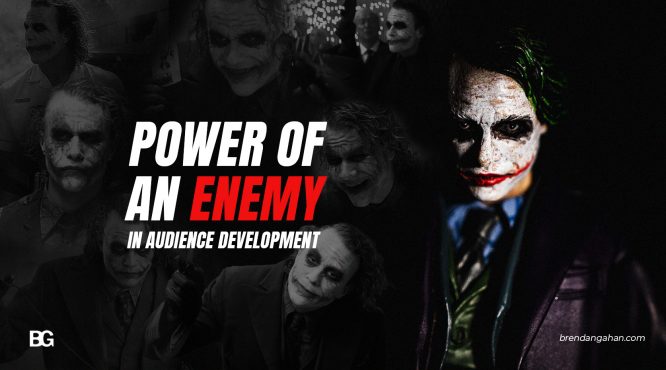 From Ancient Times & The Bible

An enemy is a galvanizing force.

It’s why the earliest American Revolutionaries continuously baited the British into harsh retaliatory actions. Many Americans were apathetic to British rule and/or appreciated being a part of the Kingdom.

As Saul Alinsky wrote in “Rules For Radicals”, those seeking independence knew that, “to expect a man to leave his wife, his children, and his home, to leave his crops standing in the field and pick up a gun and join the Revolutionary Army” would only stem from complete polarization.

Ultimately, when British responses escalated to the point they were seen as a draconian ruler. This was critical to the early revolutionaries. Because, “in no war has the enemy or the cause ever been gray.”

This is the power of an enemy.

An enemy is as effective in rallying troops to war as it is to rallying viewers to their TV screens.

To Modern TV, Wrestling & The Role of Heels

Just look at the popularity of wrestling. The WWE gets more attendance than the super bowl and is the third most watched ‘sport in the US’.

Why? What is it that is drawing millions of people into watching a FAKE sport?

The secret to WWE’s success is found in the ‘heel’.

In pro wrestling the heel is a wrestler who plays the role of the villain. He (or she) acts as the antagonist to the heroic protagonist (i.e. the good guys). The heel spurs “the crowd to obstreperous hatred, and generally involves cheating and pretty much any other manner of socially unacceptable behavior that will get the job done.”

They must provide the fuel for drama and act as a foil to the heroic protagonist.

In the early days of wrestling, in order to maintain the façade of genuine rivalry, good guys were supposed to travel with good guys and bad guys with bad guys.

Enemy is the focal point and the drama is the fuel.

The greatest storytellers and community builders understand this.

The most successful digital creators implement this same strategy. They create enemies (real or perceived) to fuel drama which grows their audiences and keeps them engaged.

As one of the most hated YouTubers, Paul has fully embraced his role as ‘heel’. It’s been lucrative for him. Most recently he received an estimated $10 million payout for his boxing match with Ben Askren.

Even in categories such as Minecraft this universal power of cultivating an enemy is driving channel growth. Most notably the Technoblade rivalry with Dream.

They’ve developed the Minecraft version of wrestling. A rivalry that’s all for show – meant to fuel each other’s growth.

While their rivalry is entirely friendly, you wouldn’t know it you looked at their respective fans’ comments – thousands of kids spend countless hours arguing in the comment sections of who’s a better player, hating the other side’s fans… it got to the point where other fans started imploring them to “not pressure Dream nor Technoblade to uphold this rivalry ‘seriously’. Please do not react harshly to either Dream nor Techno if one of them loses fights against each other.”

Dream realized the power of creating rivalries and he decided to take this to the next level.

Dream started a private Minecraft server, the Dream SMP. He and his team create elaborate roleplay scenarios where popular Minecraft creators would join and play extreme versions of themselves. The Minecraft equivalent of a WWE event.

There’s entire storylines of conflict, drama, coalitions, backstabbing. Within these matches one player, Tommyinnit, has risen to prominence by playing the heel.

Tommy himself admits that most people find him annoying. He regularly trolls the audience and other players with wild videos like “I killed Dream and it changed everything.” The result has made the Dream SMP the most popular Minecraft series of 2020). Additionally, Tommy’s growth has skyrocketed – in just under 2 years, he grew from 5k subscribers to almost 10 million this month.

The idea of an enemy is one that transcends cultures and media.

It’s an innately human characteristic. A natural psychological urge we can tap into for our own benefit.

Sociologist Georg Simmel argued that nothing unites a community like a common enemy. Research by Psychologist Mark Landau found that having an enemy provides psychological benefits. That people, “create enemies in order to maintain a stable, coherent, clear view of the world. This is because they can attribute the negatives of the world (which are inevitable) to these enemies.”

In short, we need an enemy.

Whether a friendly rivalry or a murderous feud. Enemies give us purpose. Anyone who understands this, whether it be influencers or revolutionaries, can propel an audience toward a common goal.

As Robert Greene noted in The 48 Laws of Power, “a sharply defined enemy is a far stronger argument for your side than all the words you could possibly put together.”

Your audience wants an enemy. Give them one.

Posted in:
influencer marketing, social media, Uncategorized, YouTube Creator
Tagged as:
audience developmentsocial media strategy
If you liked this article please consider sharing it.
Articles You May Like