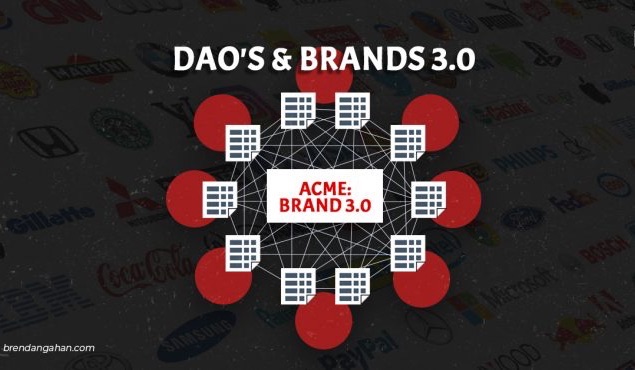 It’s a problem. But, you’re able to overcome it through brute force. You buy your way to the onramp of my brain. Facebook, Google, Twitter, TikTok. Platforms sell you bits of my attention for a fee. It’s NOT an arrangement I’m happy about. But, it works (for now).

However, you’ve got a problem. One you probably didn’t even know existed.

That onramp to my brain is slowly being closed to you.

Web2 is the internet we know today. Social media. Everyone is a creator. And, it’s dominated by conglomerates trading dollars for access to consumers.

Web3 will undermine the monopoly of those conglomerates. Web3 will be a decentralized internet, run on the blockchain.

Think of it this way. Zuckerberg runs Facebook. This is a centralized organization.

The Web3 version of Facebook will not have a Zuckerberg. Instead, the developers, users, and contributors will have a stake in the business and a vote in how its run.

With Web3 communities, NOT companies, will have the final say.

DAO’s are not incorporated. They operate cross-borders. They’re (largely) pseudonymous. People vote collectively on the issues important to them.

You don’t own shares – you own tokens – these allow varying levels of voting and buying power.

It’s not quite ownership in the traditional sense. It’s more akin to a club where members have a financial stake and say in how things are run.

Why would anyone take the time and effort to participate in a DAO? The internet works well enough.

The first rudimentary, paved roads were constructed in the Mesopotamian cities of Ur and Babylon (now modern day Iraq). They were constructed for a specific need – commerce.  However, all citizens soon benefited from the increased trade and communication. The efforts of a few benefited the many.

At this moment a handful of intrepid ‘road builders’ are paving Web3. Once this is built, why wouldn’t people use DAO’s?

You trade your data and privacy to ‘visit’ your family on Facebook. You trade time, in the form of ads, to be entertained. These tolls can change at any given moment.

At the same time, the centralized few are profiting. You get bilked while Zuck makes billions.

Now imagine tomorrow there are two roads. One where you’re taxed heavily. The other you profit from. The latter is Web3. The former is today’s Web2.

Which do you think most people will choose?

Seems obvious enough. Since when has ownership, profit, privacy, anonymity, and control not been appealing? This is the promise of web3.

Now, what does this mean for your brand?

Today, Web3 and DAO’s are in a nascent state. There is (some) time to prepare.

The one thing your brand will need to do in order to change? Embrace communities.

Your brand will have to actually do the things you’ve been saying brands should do (but haven’t). Be transparent, add value, engage, be nimble, adapt. Listen vs disrupt.

Insert buzzword du jour. These changes must be made.

Because, paying for access will no longer be possible.

You’re a running shoe brand. There’s a large DAO composed of avid runners. You negotiate access and purchase tokens to the community. You start plastering your shitty ad everywhere. Perhaps the community puts up with this.

However, waiting in the wings is Brand #2. They also buy tokens into the community. Rather than make the same mistake as brand #1, they participate. They don’t put up a single ad.

Instead, they bring in their pro athletes to do AMAs, they have experts answer questions. They sponsor races. They share training programs. They support burgeoning amateurs. They share exclusive innovations and provide sneak peeks to the upcoming product lines, asking for user feedback.

Which brand would you rather be exposed to?

Remember, the users are the owners.

Not only will the first brand be ignored, they will be banned. No access allowed. Do not pass go. Access to the community is blocked.

Money is no longer enough.

Brand #2 will thrive while others languish in self inflicted obscurity.

This is the bar that will be set.

Seth Godin wrote that, “a brand is the set of expectations, memories, stories and relationships that, taken together, account for a consumer’s decision to choose one product or service over another.”

This will soon become more true than ever. This is brand 3.0.

Posted in:
Uncategorized
Tagged as:
daodaosethereumweb3web3 advertising
If you liked this article please consider sharing it.
Articles You May Like

Samsung gets fewer likes than your grandmother.
Read More...