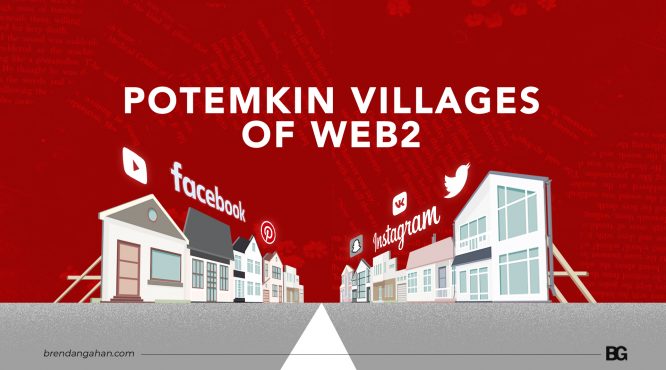 Samsung gets fewer likes than your grandmother.

With over 161 million ‘followers’ they’re the largest brand on Facebook. So, you’d think they’d have an engaged community, right?

A scroll through their page reveals a shockingly small amount of interaction.

The promise of social media marketing was a direct line of communication to consumers – growing meaningful connections and communities.

That vision has been bastardized over the years.

The role brands play within social media conjures up the origin story of Potemkin Villages.

In 1784, Russia annexed the Crimean Peninsula.

Two years later the Empress of Russia, Catherine The Great decided to tour her new territory. Wanting to impress his Queen (and rumored lover), the Crimean Viceroy panicked. The territory was in disrepair.

He had building facades constructed and placed on wheels. He brought in well fed cattle and hired healthy villagers to populate these ‘towns’.

What Catherine the Great saw was an illusion crafted to appease her. She saw what appeared to be bustling villages. In reality, they were only building exteriors with a handful of paid actors.

In the same way Potemkin opted for facades in place of investing in real infrastructure; brands have largely failed to build real communities. Chasing followers in order to take CMO’s on their own version of Catherine the Great’s Crimea tour.

They’re shown the numbers, meant to reflect the bustling community.  When in reality, they’re not ‘real’ communities at all.

It’s easy to point the finger at Facebook (and other platforms).

However, they had accomplices in brand managers and agencies. Eager to generate quick wins they’d run follower acquisition campaigns to create the perception of a thriving community. Spending comparatively little to cultivate these ‘communities’.

In other words – the ‘social’ in ‘social media’ has been forgotten.

So, this is where we’re at.

These brands are about to wake up to a harsh reality.

The digital world is in a state of transition.

Gen Z in particular, is, “eschewing traditional social media for “digital campfires,” more intimate online destinations where they private message or connect either in micro-communities.”

They’re gravitating to Discord, and other ‘dark social’ platforms. Arenas where there’s a greater sense of purpose and intimacy.

This is going to dramatically impact brands.

In a world shifting from Web2 to Web3 marketers will no longer be able to pay for eyeballs. Paying to grow a ‘community’ isn’t going to be possible. And, paying to even reach consumers is unlikely to be an option at all.

In a Web3 world users will be in control.

They’ll have built the digital roads and infrastructure for themselves – not for the brands.

Catherine the Great once said, “I shall be an autocrat, that’s my trade; and the good Lord will forgive me, that’s his.”

In the Web3 internet there will be no autocrats.

With the creators in charge, they’ll want to collaborate with brands that bring real value – NOT those who flitted away the last 15 years of Web2.0 building the Potemkin Villages of the internet.

Posted in:
Uncategorized
Tagged as:
social media strategyweb2web3web3 advertising
If you liked this article please consider sharing it.
Articles You May Like

Introducing DAO and brands 3.0 and the reasons these will be huge thing in the near future.