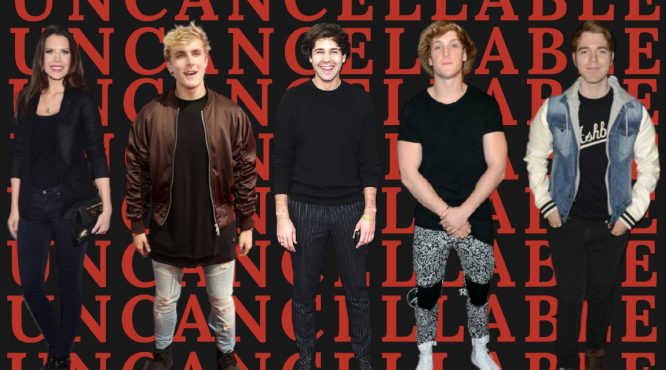 Dobrik is back. Dawson is easing his way back into the spotlight. Logan Paul has gone from the most hated internet personality to international superstar.

Contrast this with traditional celebrities.

In 2018 Today Show anchor Megan Kelly was fired from NBC’s Today show. She hasn’t been on network TV since.

Jimmy Kimmel went on a two month hiatus after videos of him in blackface resurfaced. Roseanne was fired from her own show after a racist tweet.

On YouTube the rules of cancel culture for creators are very different.

There are no network execs to fire a creator.

Their fate is (almost) entirely in their audience’s hands. Their ability to withstand scandal comes down to how strong a connection they have with their audience.

So where does that leave controversial creators?

They’re in a very different position than their celebrity counterparts. They decide if AND when they want to come back.

Dobrik, one of the most famous YouTubers and leader of the Vlog Squad, is making a comeback. Three months ago people were saying his career was over. He was mired in a series of controversies. He’d maimed one of his friends in a prank gone wrong. Fellow Vlog Squad member, Durte Dom was accused of rape. Additionally, Vlog Squad member Seth Francois says he was sexually assaulted during one of Dobrik’s video shoots.

Yet, after a short hiatus Dobrik is back. His first video back following the controversy has already generated over 9 million views.

How is it that his popularity seems unscathed?

Parasocial bonding is defined as a strong emotional bond with another person who doesn’t reciprocate. This is typically because they don’t even know of the other person’s existence.

With the advent of social media parasocial bonding is commonplace.

Pamela Rutledge, director of the Media Psychology Research Center explains that with social media, “We see the face. We see the action. So it isn’t as separate from face-to-face communication as our brains process it, as we might rationally or consciously think.”

YouTubers replicate that face-to-face communication which creates a sense of intimacy. They speak directly into the camera as if they’re looking at you directly. They share their homes, eat in front of the camera, lounge in their PJ’s.

This all stimulates the feeling of knowing someone and developing a personal connection.

Dawson, who has been on hiatus from YouTube for over a year following his own series of controversies, is a master at this. Over the last 13 years he’s been offensive, vulnerable, and everything in between. So while he’s now known to the broader world because of his offensive antics, his fans see a completely different Shane.

On YouTube Shane documented his struggles with depression. He shared the angst, anxiety, and fear associated with his bisexuality. He’s displayed his battles with body dysmorphia, his troubled relationship with his father, and his sexual abuse as a child.

What’s the byproduct of this?

Shane has a fanbase of over 20 million subscribers.

These aren’t casual fans. These people have formed extreme parasocial bonds. They feel like they are his friends or family.

We’ve seen the support of his community time and time again.

You could spend millions of dollars making an amazing film, and it wouldn’t outweigh the bond his fans have. You like movies, but you love your friends. That’s the way his fans feel anyway.

So, where does all this leave Shane? Many fans are disappointed in him (and rightly so). But, like your racist uncle who’s actions you may excuse, they’ll be there for him.

“He’s not that bad once you get to know him”

“He doesn’t actually mean that stuff he said.”

Ultimately, his fans haven’t left him. They’re eagerly awaiting his return to YouTube. He’s already teased his formal comeback. In the meantime cameos in his boyfriend Ryland Adam’s videos have given Ryland a significant bump in viewership.

Posted in:
influencer, influencer marketing, social media
Tagged as:
cancelleddobrikinfluencerslogan paulshane dawson
If you liked this article please consider sharing it.
Articles You May Like