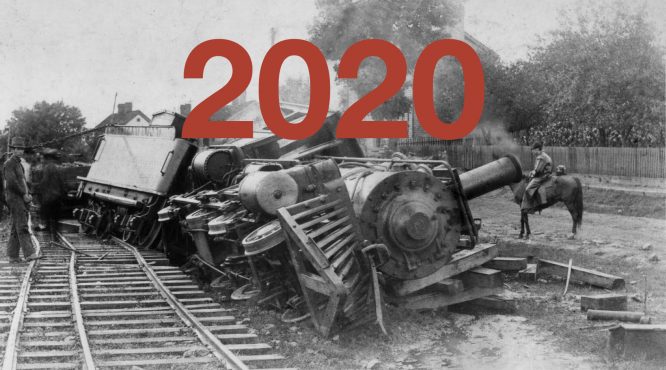 Necessity is the mother of all invention.

The impact the pandemic had on our lives was drastic. Many claim it spurred digital adoption, which otherwise, would have taken 5-10 years to accomplish.

Looking back on the year, here are the three biggest trends that stand out.

1) Live-Streaming Went Mainstream
With everyone being shuttered indoors, real world events and activities went online in record numbers. This gave a collective bump to live-streaming viewership, and platforms responded by doubling down on improving streaming features as a whole.

According to Emarketer there will have been 151.5 million live video viewers in the US this year. That’s a 19.6% increase over 2019, and 12 points over their original forecast of 7.8% growth.

The pandemic increased demand for live-streaming and the platforms doubled down on products and features.

YouTube has rolled out a ton of original live programming. Twitch has aggressively pushed their content beyond gaming. At this stage the second most popular category on Twitch is ‘just chatting’.

Facebook (sort of) absorbed Mixer, signed a number of gamers, and launched a slew of live features.

The impact was so dramatic that this year live-streaming nearly reached 2023 forecasts.

2) Commerce is Becoming Social and Social is Becoming Commerce
Just like with events, shopping got a strong boost online. Social platforms have begun to integrate e-commerce (and vice versa).

Most notably, Facebook Shops launched in May. Facebook Shops make it, “easy for businesses to set up a single online store for customers to access on both Facebook and Instagram.” This deeper integration of social and commerce resulted in a backlash toward Instagram. The redesign has a dedicated shopping tab (which many were vocal about disliking).

It’s been confirmed by YouTube that they’re working to integrate shopping directly within YouTube itself. That, “the goal is to convert YouTube’s bounty of videos into a vast catalog of items that viewers can peruse, click on and buy directly.”

As Bloomberg pointed, these changes in the integration of social and commerce have the potential to transform these “advertising giants” into “a new contender for e-commerce leaders such as Amazon.com Inc. and Alibaba Group Holding Ltd.”

Amazon has been approaching this from the opposite direction. They’ve quietly been pushing Amazon live.

Given how massive live-streaming e-commerce is in China ($136 billion this year) this seems to be the next frontier of social commerce.

People are scattering and connecting with one another across more platforms than ever, spurred by everything from their political affiliation to their evolving needs in the global pandemic.

For example, Discord, which allows for private communities and discussions exploded in popularity. The app was already incredibly popular but their user base increased by 47% from February to July.

AppAnnie estimated they were averaging 800k downloads a day in early Sept. This explosion in growth is largely attributed to the rise of Among Us , which integrated Discord as a seamless solution for the voice chat between numerous players, an essential part of the game experience.

Additionally, celebrities and influencers alike opted to own the direct line of communication with fans via SMS.

Community, a startup, which enables direct communication with the people at scale via text messaging has been leading the charge. Most notably, Obama joined the platform this year.

Additionally, on the heels of Biden winning the election we saw Trump supporters defect Facebook and Twitter in droves. As a result, previously obscure apps exploded in popularity overnight.

Both Parler and MeWe, two apps that have catered to those with right wing political beliefs, benefited the most. Immediately following the election Parler was #1 in the app store and stayed there for several days.

Social media has already allowed us to create our own echo chambers. The fact that we are siloing ourselves off into unique platforms is going to increase the effect.

There’s likely to be many positives – close knit communities and connections, etc. However, it seems likely it will also ramp up political divisiveness.

So what should we do about this?
We saw an accelerated adoption of digital and social.

There’s no fooling ourselves. This is all here to stay – a new baseline has been established. We’ve adopted new behaviors and habits. New platforms, live-streaming events, and a more siloed internet.

As a result, you need to be ready to adapt.

While there may be dips post-pandemic there is no going back to the way things were before.

The Skinner Box: Why Instagram Will Never Remove Likes

Wired’s article ‘The Influencer Economy Hurtles Toward Its First Recession’ gets a lot right.
Read More...
Like What You're Reading?
Sign up for my newsletter. It's free and I'll never spam you.